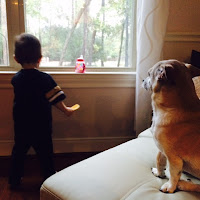 She’s crying again, tomp tomp tomp tomp tomp go her tiny feet, her fine black hair standing up in the breeze she’s creating as she’s running.  I kneel down and open my arms.  She runs into them with her own tiny arms open wide.  She snuggles down into the crook of my neck.  I pick her up and rub her back.  She stops crying a little but looks at me with her mouth turned down.  Her teeth are hurting, or she has a tummy ache, or she stubbed her toe.  Pre-verbal expression it’s anyone’s guess and if there are mom’s out there who instinctively know I’m happy for them but that isn’t me.  Right now I’m assuming she’s teething - both because it’s swollen where her eye teeth should be and because the Dr said they were coming in at her 18 month check-up last week.

The tylenol I gave her at 4pm doesn’t seem to be helping much.  She also missed her nap today, Bill and I went to a Buffalo Wings to watch the Saints-Giants game.  (Saints won, Saints won!)  Texan and Titan game was also playing so we were in the minority with our Giant/Saint jerseys on.  We didn’t mind, since we moved here we’ve often felt just a liiiitle out of step with the rest of Texas.  We’ll adjust.  Or they will.  Someone will.

So she’s miserable all afternoon.

I finally get her some supper (rice, broccoli and salmon.  She loooooves salmon so supper was easy at least).  But then I undressed her beside the tub for her bath and when the diaper dropped a small dob of poo came out with it.  A bonus.  Just for me.  So I scooped it up with the diaper and threw it in her trash and after it hit the can I saw THERE WAS NO BAG IN THE TRASH CAN.  I’d emptied it the other night when I should have been sleeping and forgot to replace the bag.  Ew.  I tried to wipe her off with a wet piece of toilet paper and place it carefully on top of the diaper so it doesn’t touch the sides of the can and then get her in the tub.  Immediately four or five pieces of poop float out from her bottom where I missed them and settled to the bottom of the tub.  I just realized now I bleached the tub when she was done and the toy she had in there and totally forgot to disinfect the floor where the dob of poo fell.

Just a second while I do that…

Ok you know I didn’t just do it.  But I will, I will.  I PROBABLY won’t forget again.

So we’re trying to wean her from the pacey too which is not helping her mood.  Pacey’s are now only for nap and bedtime.  They stay in the crib.  The problem?  Nap time when she doesn’t nap and doesn’t understand why mom is taking out the pacey all of a sudden.  Changing the rules on babies SUCKS.  Ugh.

We need to wean her from the nighttime bottle too but momma isn’t ready for that drama yet.  She’s going to be 18 and still need that bottle before bed.  And the psychiatrist will want to speak to me about my inability to let her experience anything negative ever.  I’ll want to speak to me about it too.  Luckily I won’t be far away, I’ll be paying for the psychiatrist myself and be waiting in the waiting room with crackers and a juice box in case she gets hungry or thirsty.

I can’t imagine a time I won’t be RIGHT THERE ALL THE TIME, waiting to give her what she needs.  This is how crazy-smothering-the-child-with-love-mom starts.  I know it.  I can feel it.  Those wild-eyed beings who sacrifice their whole being in service of their offspring.  And because they love their moms, they don’t spread their wings and fly.  They stay close and let mom cover them with her wings.  Shade from the sun, protection from the rain, shelter from the storm.  A wall between the blue sky and their own wings, a limit to their own dreams, a stopper in the throat of their own song.  I won’t do that.

But it will be an effort not to.  It will be a conscious decision, every day.  This momma bear roars loud and loves hard but she’s trying to be wise, too.  I know I can’t protect her from everything, all the time.  I’m going to blink and she’s going to be in school and I won’t be there to pick her up if she stumbles.  I won’t be there with open arms to soothe her when she’s upset or hurt.  The best I can hope for is that Bill and I raise her to trust in herself.  To pick herself back up when she falls.  To be confident in her own self, to know she’s never really alone.  That’s she’s loved and protected, shielded and guided even when she can’t see us.  That we trust the world is basically a good and happy place and most people are doing their best with what they’ve been given.  And when they’re not, they’re just giving you a chance to learn how good it feels to let it go, to forgive, and to give second chances.  And if we’re all really lucky, someday thirty years from now, Ellie will be cleaning dobs of poo herself.  While she runs the country as President of the United States of America.  Or Prime Minister of Canada.  Or the first North American Prime-President.  VOTE ELLIE 2045!!!! 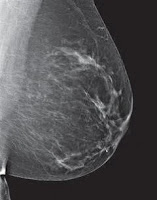