This Too Shall Pass, Eh? 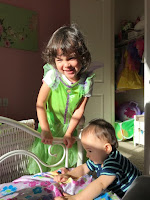 I was checking out at Target yesterday and the cashier stopped to smile at the onsie pajamas I had in the cart for Ben.  Clearly pregnant, I asked if it was her first.  She said yes.  Dreamily, happily, lovingly.  Oh, honey.  I thought.

And then I thought…don’t I have an obligation to tell her what she’s in for?  The months and sometimes years of sleepless nights, the poop that flies out of the diaper when they rollick around in protest of being changed, the hours spent in a doctors office to tell you they’re fine, the tantrums, the yelling, the screaming, the bodily death-match that occurs EVERY TIME I TRY TO GET THIS KID IN HIS CAR SEAT?

The gobs of applesauce on…everything.  At least, you hope it’s applesauce.  The hours spent soothing, clearing, cleaning, being vigilant because anything, ANYTHING could kill your baby right now.

I left Benji with Bill for TEN minutes while I cleaned my room just now (sometimes I clean!) and when I checked on him he was covered in granola crumbs (yes with nuts inside which he has never been exposed to) and be still my stampeding heart when he began to choke and gag.

I watched helplessly, waiting for his face to turn red, then blue, and racing around to find the phone to call 911.  But he didn’t turn red or blue.  He did continue to gag.  Looking inside his mouth I found a quarter sized piece of green cellophane granola-bar wrapper.  After several tries I finally removed it.

Am I angry at Bill?  Yes and no.  He doesn’t spend all day every-day on constant death-watch.  He didn’t know how quickly he can get himself in trouble.  Now he knows.  Lesson learned for everyone with, hopefully no ill consequences.

Anyway, back to Target, after tallying up what I owed I gave her my credit-card, took my receipt and said…”Good luck.”

What, I’m going to scare her now?

I do think I helpfully saved another young girl from getting pregnant too soon.  I met her at the mall while buying ice-cream.  After totally melting at the sight of my babies she admitted her and her boyfriend are trying.  (she looked like...14 but she may have been 19).  “I just want a baby so bad!  They’re so cute!”  She said.

“Lady I haven’t slept more than 3 hours straight in 11 months.  My advice?  Sleep now.  And wait until you don’t need sleep to have kids.  Or money.”  She was a little taken aback.

Well, good.  I don’t know why we aren’t more honest with each other.  Having a baby is HUGE.  And it’s hard.  And just when your patience has run out and you’re out of energy and you’re on your very last nerve, they both melt down and scream and cry and you do too.  Because you’re tired.  And you haven’t been away from the precious bundles for more than 3 hours in their whole lives.

Of course it’s worth it.

But pretending the hard stuff isn’t so hard is a disservice to those young moms who have no idea what they’re about to plunge into.  Loving is hard.  The love you have for your kids takes your whole being, mind, body, and soul.  And then asks for more.  And you give it.  Because you’d do anything for your kids, even run yourself totally empty until you’re a mommie-zombie.

Luckily re-charging ins’t too hard if it’s done daily.  Some cat videos on Youtube, chocolate, a glass of wine after they go to bed, a funny book.  It’s all good.  Because tomorrow you will do it all again and one sticky-fingered hug puts enough love back in that it shoots out the top of your head and falls out all around you.

To finish off, here are some things Ellie has said recently that totally cracked me up:

Ellie:  (While eating) Is my tummy growing so big and strong so I can use hammers?
Me: Ah…yes?

Nana: What do you want for Christmas Ellie?
Ellie: Rainbows!

Me (About an hour later): What do you want for Christmas Ellie?
Ellie: A string ball!
Me:  OK, what’s a string ball?
Ellie:  I don’t know!  (She says happily, throwing her hands in the air).  Got that Santa?

Ellie slipped and fell on the floor this weekend and hurt the underside of her chin.  Later, as we were eating lunch, she says:

OK, that’s it, go hug your kids and remember sometimes it sucks, it just does.  And that’s ok.  My new (old) motto is ‘This Too Shall Pass”. 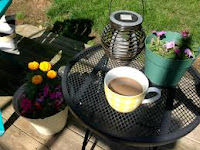